Lyme disease is transmitted to people by the bite of infected blacklegged ticks. Typical symptoms include fever, headache, fatigue, and a characteristic skin rash.  If left untreated, infection can spread to joints, the heart, and the nervous system. Lyme disease is diagnosed based on symptoms, physical findings (e.g., rash), and the possibility of exposure to infected ticks.

Southern Tick-Associated Rash Illness (STARI) is most prevalent in the southeastern U.S.  A rash similar to the rash of Lyme disease has been described in humans following bites of the lone star tick.  The rash may be accompanied by fatigue, fever, headache, muscle and joint pains.

The rash of STARI is a red, expanding “bulls eye” lesion that develops around the site of a lone star tick bite. The rash usually appears within 7 days of tick bite and expands to a diameter of 3 inches or more. The rash should not be confused with much smaller areas of redness and discomfort that can occur commonly at tick bite sites.

Rocky Mountain spotted fever (RMSF) is a seasonal disease and occurs throughout the United States.  The American dog tick and Rocky Mountain wood tick are the primary vectors which transmit RMSF bacteria.

The signs and symptoms people develop depend on how they are exposed to tularemia. Possible symptoms include skin ulcers, swollen and painful lymph glands, inflamed eyes, sore throat, mouth sores, diarrhea or pneumonia. Tularemia can be fatal if the person is not treated with appropriate antibiotics. 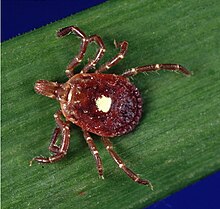 [1] Information derived from the Centers for Disease Control and Prevention website, http://www.cdc.gov