Fleas are small flightless insects that form the order Siphonaptera. They are external parasites of warm-blooded animals, living by hematophagy off the blood of mammals and birds. The adults are up to about 3 mm (0.12 in) long and usually brown. They are flattened sideways to enable them to move through their host’s fur or feathers, and have strong claws to prevent themselves from being dislodged. They are wingless insects, with mouthparts adapted for piercing skin and sucking blood and hind legs adapted for jumping. They can leap a distance of some 50 times their body length, a feat second only to jumps made by froghoppers. The larvae are worm-like with no limbs; they have chewing mouthparts and feed on organic debris.

Over 2,500 species of fleas have been described worldwide. The Siphonaptera are most closely related to the snow scorpionflies (Boreidae), placing them within the endopterygote insect order Mecoptera.

Fleas arose in the early Cretaceous, most likely as ectoparasites of mammals and marsupials, before moving on to other groups including birds. Each species of flea is more or less a specialist on its host animal species: many species never breed on any other host, though some are less selective. Some families of fleas are exclusive to a single host group: for example, the Malacopsyllidae are found only on armadillos, the Ischnopsyllidae only on bats, and the Chimaeropsyllidae only on elephant shrews. The oriental rat flea, Xenopsylla cheopis, is a vector of Yersinia pestis, the bacterium which causes bubonic plague. The disease was spread by rodents such as the black rat, which were bitten by fleas that then infected humans. Major outbreaks included the Plague of Justinian and the Black Death, both of which killed a sizeable fraction of the world’s population. 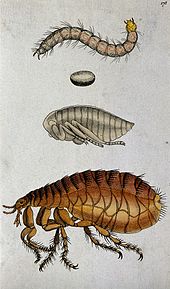